The heat is on for another powerboat race in Singapore. It has been 15 years since the last one held at Marina Bay. 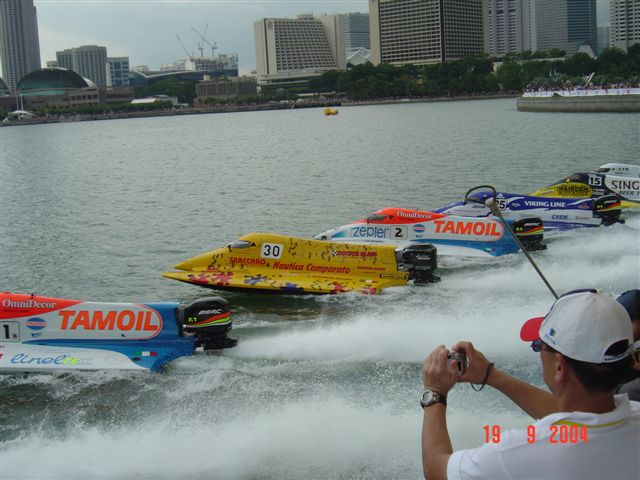 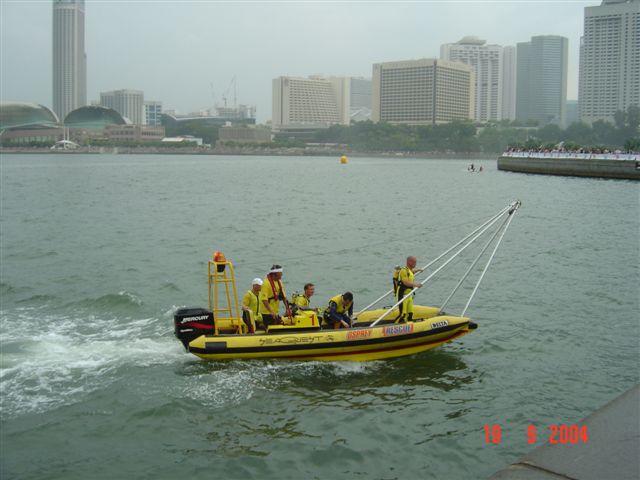 This coming race will be very different. The race boats are entry level for the common man in the street who wants to race. These boats are know as T750s, about 14 feet long fitted with stock Tohatsu 50hp Outboards and capable of speeds up to 55 mph. They are single seat, mono hulls using foot throttles and fueled with 20 litre plastic petrol tanks. 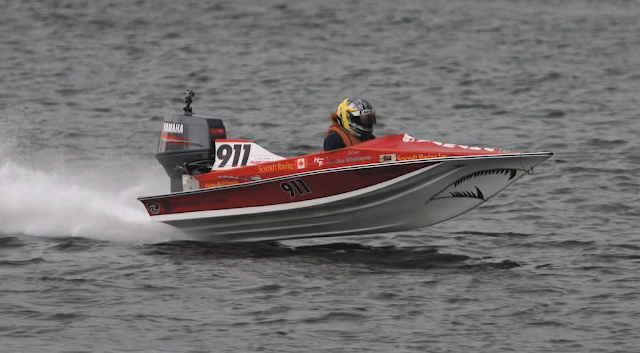 Posted by Captain William Francis at 5:05 PM No comments:

Fewer recreational anglers have been heading to Indonesia for deep-sea fishing trips since 28 people - almost all Singaporean anglers, were arrested for alleged trespassing and immigration offences earlier this year. Members of the fishing community here say Singaporeans are instead fishing in local waters or in Malaysia. Two Singaporean boat captains, Shoo Chiau Huat and Ricky Tan Poh Hui, remain in Indonesian custody pending their court hearings in the Riau Islands' provincial capital of Tanjung Pinang. Shoo was arrested on April 16 2018 in Tanjung Berakit, off Bintan, while Ricky Tan and his crew and passengers were caught on Aug 21 2018.

Their passengers, mainly anglers, were deported shortly after being detained but the captains were held for trespassing or immigration offences. Earlier this month, 10 Singaporean anglers were also stopped for sailing in an unlicensed boat off Bintan island. Their Indonesian-flagged vessel was said to be sailing in Indonesian waters without valid permits and a proper passenger manifest. The Sunday Times understands that all 10 passengers on the fishing boat have been released and since returned to the country. Indonesia has been increasing sea patrols - mainly targeting illegal, unreported and unregulated fishing - since President Joko Widodo announced plans to beef up the country's fisheries sector last year. Anyone who enters Indonesia illegally could spend up to a year in prison, while infringement of the Fisheries Act - which covers illegal fishing - carries a sentence of up to five years in jail. Mr Joe Ng, 60, owner of Joe Fishing Tackle in Beach Road, estimates that there has been more than a 50-per-cent drop in the number of anglers travelling to Indonesia. He has been in the fishing business for more than 20 years and used to travel to Indonesian waters. "Those who go regularly to Indonesia to fish are generally above the age of 40," he said. "Such trips often involve spending nights on a boat and can be uncomfortable for land-lubbers." But anglers enjoy fishing there as they catch more as well as land bigger fish. Mr Augustine Chai, 48, owner of trip organiser Fishing Affairs, said that since the incidents, around half his customers who were heading to Indonesia either cancelled their packages or chose a local fishing trip. He added that boat captains are being cautious. "Instead of staying 12 nautical miles away from territorial borders, some stay 20 nm or more away." Mr Soh Hoe Jiang, 50, a fishing boat charter operator and boat captain of 16 years, sails to Indonesian waters about twice a week but has seen a fall in bookings. "Our operations now involve clearance, such as passport and port clearances and customs declarations, with Indonesian authorities in Nongsa Pt Marina or Bintan before we fish in their waters," he said, adding that customers fish for leisure and not profit. "Problems arise when they consider us commercial fishermen." Mr Ivan Goh, 37, chief guide of Deep Sea Fishing, which runs fishing charters, said the firm has stopped making trips to Indonesian waters where the incidents took place as a "precaution". While he will be taking customers on a trip to Indonesia next month, he said, they will head to East Kalimantan, further from the area where the arrests took place. The group intends to travel by plane before going out to sea on an Indonesian-flagged vessel. He added that anglers are attracted to fishing in Indonesia because of the different species found there, such as large stingrays and shovel-nose sharks.  (Information Source. Straits Times)
Posted by Captain William Francis at 10:52 PM No comments:

The 185 hectare East Coast Park is the largest park in Singapore, and is built entirely on reclaimed land with a man-made beach, where swimming is possible. The beach is protected by breakwaters.
The park is a popular place for people to relax and unwind. The park has barbecue pits, chalets, food centres and amenities for various sports activities. Visitors can fish at Bedok Jetty (Area F). A cycling and inline skatingtrack runs along the perimeter of the park, which measures over 15 km long. It is connected to Changi Beach Park by the Coastal Park Connector Network, an 8 km park connector running along Changi Coast Road.
Overnight camping is permitted in East Coast Park, at Areas D and G. A Camping Permit is required and can be obtained from the National Parks website.
What is evidently missing is boats. Back in the early 70s, sampans were kept at no fewer than 5 boat parks. Today there's only one.

Boat owners are expected to berth their crafts at any of the 5 Marinas or 2 Yacht Clubs in Singapore. Namely; Raffles Marina, RSYC, Marina at Keppel Bay, OneDeg15, Marina Country Club (formerly Ponggol Marina), SAF Yacht Club and Changi Sailing Club. Owning a boat is no longer cheap. My first boat was a $188 wooden 18 footer sampan. The 4hp Outboard was borrowed. Berthing was just over S100 a year paid directly to the MPA at the One Stop Documentation Centre at Tg Pagar.

I hope that with the growth of the new Greater Southern Water Front region, simple boating will make a come back to these waters.

Posted by Captain William Francis at 3:16 AM No comments:

An Inflatable dinghy was so much fun in the 1970s

These must have been the very few photographs that my buddies saved over the years. Back then cameras were rare and it costs quite a bit to have the negatives developed into photos.
Those fun filled days boating off the East Coast and Coney Island will always be my most cherished memories. I'm glad for those adventures. They represented the real me. Care-free, fun loving, adventurous and daring.
I must get back to those days of Innocent living soon. Today at 59 yrs old, my thoughts are filled with a desire to live unrestricted without worry, free from the tolls of responsibilities of being husband, father and provider. It's time to let my adult kids live their own lives, whatever way they choose.
Life goes on, no matter what, so I too must live my life to the fullest it will allow me and not miss what it has to offer. The world is my oyster.
Posted by Captain William Francis at 8:22 PM No comments: 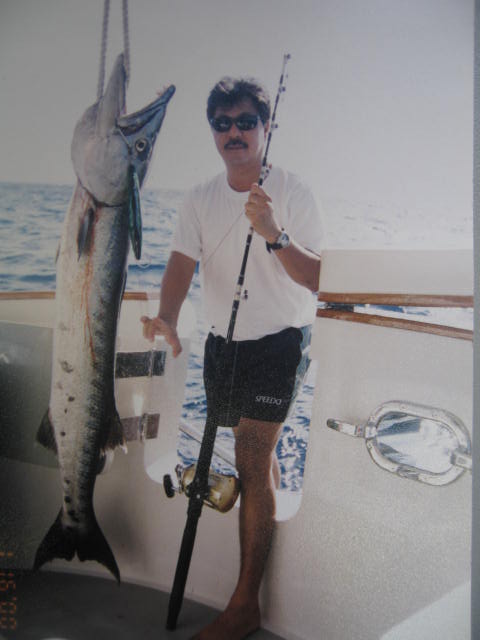 Grateful to be alive and grateful to have lived a fabulous fun filled life. This picture was taken on a friend's boat off Port Blair (Andaman Islands) in 1999. I was technically bankrupt and was facing a mountain of debt as a result of the Asian Financial crisis. This fishing trip opened my mind. I became a salesman and made enough commissions selling health supplements to pay the bank and get my life back. I never though I would make it, but I did. I thought I was finished,but the end never came. Sometimes you just gotta forget all the troubles for a while and change the scenery. I did and I'm glad the outcome turned out well...... Today, 20 years later, I'm debt free and own my own home. I may never be "rich" but I'm grateful for the food on the table each day and a strong roof over my head. My family is happy and content.

Posted by Captain William Francis at 7:29 PM No comments:


This gentleman Wim Hof, affectionately known as the Iceman has an incredible discovery leading to wellness and well-being.  Learning his breathing technique is a must if your'e interested in good health.
Posted by Captain William Francis at 7:28 PM No comments:

Modern innovations are amazing. They can turn everyday equipment into new and clever applications not though of before. Such is the power of creativity. Simpler being better. Take a look at the applications of the humble PWC, once associated with the young and reckless. It's now being used for good.

Posted by Captain William Francis at 1:28 AM No comments:

Live the Dream to Build the Dream 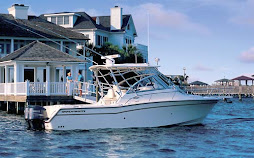 Waterfront living is now a reality in Singapore. I love the idea of waking up to the sound of waves lapping at my front moorings. Taking the boat out anytime I feel like it and inhailing the fresh sea breeze every evening right at my doorstep. It is indeed a dream come true for Singaporeans with a passion for this lifestyle. Join me as I journey into the last frontier, the sea and explore the wonders of nature within the reach of the Singapore Seafarer. So cast off all lines mate and sail forth yonder... 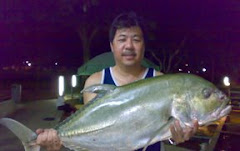 I have always harboured the notion that there are no fish in Singapore. This percetion changed the day I met up with Ahmad from Ponggol Marina and Jiang from Keppel. There gurus of fishing, work as charter boat captains and are testimony to the wide variety of fish found in our waters. The key these 2 gentlemen say are water condition, current and the fishing spot. I have also met other local charter boat captains, who time & again come back with ice-boxes full of respectable table-size fish. The question is how come these guys have all the luck and we only get to watch videos of their catches. Well, I have decided to go on a second mission to uncover the secrets of these gurus. So stay tuned and watch out for these reports, coming your way soon.... 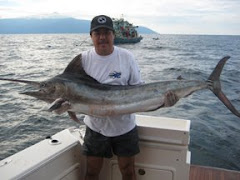 I was live-baiting for Mahi-mahi. Who would have thought a marling would be interested in my lively little kembong. Surprises like this make sea fishing that much more fun. 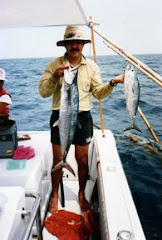 Those were the days when unjangs were marked by bamboo poles sticking out of the water. These days its tough to spot an unjang, as they are now marked with blue buoys just on the surface. Hence initial visibility range is about 400 yards 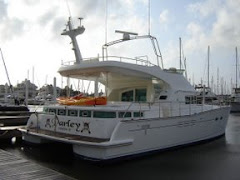 The Cat has come a long way. In the early years of development, the modest catamaran faced many bad comments, from noisy, incapable of handling big seas, to unseaworthy construction. Times have changed, technologies have kept paced with imagination. The catamaran has evolved into a worthy passage maker, capable of steaming at an economical 9 knots, and increasing to 20+ knots when the need arises. Today, I can no longer see any disadvantages of a Cat. The advantages are obvious, fuel economy, speed, space and stability at anchor. I just might get one of these someday soon. 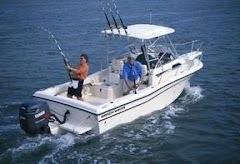 Perfect for new boaters, it has everything you need for fishing, diving & cruising S'pore waters, and an occasional cruise to Aur & Tioman. Safe, economical & high resale value. 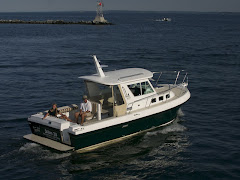 Great all-rounder boat for Fishing & Diving S'pore & M'sian waters. A comfortable, dry boat if you're not in a hurry. What it lacks in speed it makes up in economy.

My personal favorite. Perfect platform for fishing & diving S'pore & Malaysian waters, with the occasional run to Phuket Thailand. Great sea-keeping hull, in all weather with 4-stroke economy. Small enough to maneouver around reefs & big enough to handle the chops enroute to Tioman. 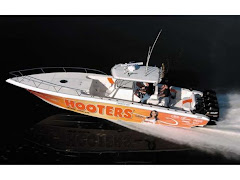 Specially built for the speed demon. Definately not for the faint hearted. This boat cruisers at 50 knots and can hit a top speed of 60knots in good seas. A boat to match your Ferrari. 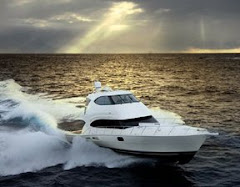 A great fishing boat for the whole region, covering S'pore, M'sia & Thailand. Fast & well equipped for the executive who need to travel there quickly & in relative comfort. Great for trolling marlins & pelagics. 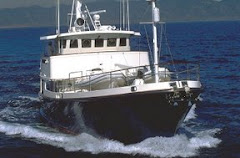 A Passage Maker to bring you safely round the world with all the comforts of a 5-star hotel. Cross oceans without worrying about the next fuel stop. Range 4,000nm at 9.5knots